Skip to content
You are here:Home-language study-When Words Get in the Way

When Words Get in the Way

“A man who speaks fastidiously will often lose the attention of his listener.”

The above quote was said by…no one. No one ever said it to me and I never said it to anyone else, but it’s a true statement. I begin this post with that quote to make a point – a point that may be difficult to understand – only because at this moment you’re still wondering what “fastidiously” means.

And even if you do know what it means, you’re still wondering why I chose to use that word instead of a more common word that most people know. Or perhaps you have other questions in mind. Am I trying to show off my vocabulary? Do I think I’m special because I know some fancy words? Should you also begin to learn new words in order to impress other people?

Distracted By My Words

The problem with these questions in your mind is that they have nothing to do with what I’m talking about (fastidious talkers). I have an opinion to share with you but you’re no longer thinking about it. You’re no longer listening to me. Your attention has been derailed….not by someone else’s comment…not by some noise or some shiny object behind me, but rather, you’re distracted because of a word I chose to use.

Words are mainly what we use to express ourselves and make a point, but it is often a poor choice of words that causes others to miss that point. It makes the listener think about something else or it makes them think about…words. To communicate well with others, this is a distraction we should avoid.

For example…if you need to tell someone that the chlorine in their drinking water is unhealthy, you could express this in a couple different ways. You could say that…

“drinking water with chlorine has a harmful effect on our health.”

If this is how you say it, I guarantee your listener will continue to listen. And they will still be listening when you make your next point;

“The water that comes out of our faucets has been treated with chlorine at our local water treatment plants. It kills bacteria and microbes in our tap water which would otherwise make us sick. However, chlorine itself can have a harmful effect on our bodies, especially on our skin and hair.”

This is very useful information to your listener. He’s following your point and it is now having an effect on him. He’s interested. He wants to hear more. “I always have dry skin,” he thinks to himself. “Maybe it’s because of the chlorine in my shower water.” The conversation goes forward, ideas are exchanged and we all learn something new. This is good communication.

Now, imagine if you had started the conversation another way. Let’s say you began by saying that…

“drinking water with chlorine has a deleterious effect on our health.”

It’s a difference of only one word, but your choice of the word “deleterious” instead of “harmful” will more-than-likely distract your listener…at least for a moment. Is it wrong to use “deleterious?” Nope…the definition of the word is to “cause harm or damage,” so I cannot say that your statement is inaccurate. But I will tell you with confidence that it’s probably been awhile since he’s heard or read the word “deleterious.” And of course it’s also possible that he’s just a simple guy who doesn’t read much and he’s never heard of this word.

If this is the case, the conversation is already over. You’re now talking about water treatment plants and he’s just standing there feeling dumb because he doesn’t know what “deleterious” means. Whether he knows this word or not, your point is likely going to be missed because one of your words got in the way.

In no way am I dismissing the importance of a deep vocabulary. It’s extremely useful to know rare words. After all, we have no control over the words that others say to us. At various times, we’re going to hear rare words or read them in publications. In those moments, it’s only the people who are familiar with lots of words who will understand and contribute to the conversation. Through reading and exposure to rich vocabularies, they have developed a deep vocabulary of their own, enabling them to understand and process just about everything they hear.

Communicate at the Level of Your Listener 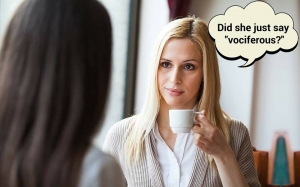 The words that we choose to use, on the other hand, is where we can place some reasonable limits. If your goal is truly to communicate well with someone else, then that communication must be at the level of your listener. You must use words they currently know so that they can understand something they currently don’t know. Your deep knowledge of a subject is useless if you cannot communicate it to others. Your rich vocabulary doesn’t help to make your point if it’s going over our head.

The words we use with a professor are very different than the words we use with a 5-year-old. Why? Because the professor’s knowledge is very advanced whereas the child’s knowledge is very basic. A good communicator is someone who is understood by both the professor and the child. That’s a very extreme example, but it clearly makes the point. A more common scenario is when we talk to adults who may or may not be familiar with the words we’re about to say. We make split-second decisions to choose one word or another. The word we should use, in my opinion, is not the “very precise word that perfectly expresses the thought.” The perfect word for that moment, I would say, is the one that the listener is most likely to understand, the word that will keep him interested in what you have to say. 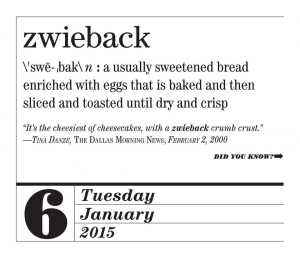 It’s great that you now know what “zwieback” means, but I don’t recommend that you say it in conversation.

Of course, I shouldn’t take it for granted that everyone is motivated to communicate well. I’m sure there are plenty of people who want others to be impressed with all the fancy words they know. To them, the rarer the word, the better. They’ll take advantage of any opportunity to sound more “sophisticated.” They probably have one of those desk calendars that teaches them a fancy new word everyday. And if they aspire to be an “intellectual,” you might as well skip the conversation and talk to someone else.

I recently heard a guy describing someone else as “loquacious.” Instead of continuing his description of the person, he immediately began to define the word “loquacious.” If the one word you choose to use is going to require an explanation with 20 words, then maybe there’s another word or phrase you could’ve used instead. I eventually realized that this man who was describing a loquacious man was also very loquacious (talkative). It didn’t seem to matter to him that I had already tuned out and started looking at my phone. He just kept on talking.

There are so many books about communication. So many speakers and authors are emphasizing the importance of listening to others, getting to the heart of what motivates them by asking the right questions. They also point out that it’s impossible to listen when you’re doing all the talking. This is all good advice for when you’re on the receiving end of the conversation. But when it’s your turn to talk, do everything possible to make sure that they’re listening to YOU. Use simple words, check to see if they’re still engaged and give them plenty of chances to talk again.

Well, I could go on and on about this…but I don’t want to sound platitudinous 🙂